So in an attempt to generate enthusiasm on my part I thought I might talk about my current major project - SARMARKAND.

Sarmarkand is an rpg world, not a game, just an environment. It will be system-less. It will present a full expanded fantasy world with a steam-punk look and feel. Magic will be variable, and based on either the classic style or using super advanced technology.

The world itself will be a slice of a ringworld, from one rim to the other. Events in the real world have resulted in two disastrous strikes on this region of the ring, that have left monumental marks, as well as nearly wiping out two intelligent races.  The after effects of the strikes are more likely to cause problems however.

So I started working on this project this year. I had bought this really nice notebook with a leather cover and hand made pages within. I was also going through a phase of collecting fountain pens at the time so the two events came together and I started making notes in the book with my new pens.  I can't recall why I thought of a ringworld slice to start with, but the first page of the notebook had my initial sketch of the world, and that has mostly remained pretty true. 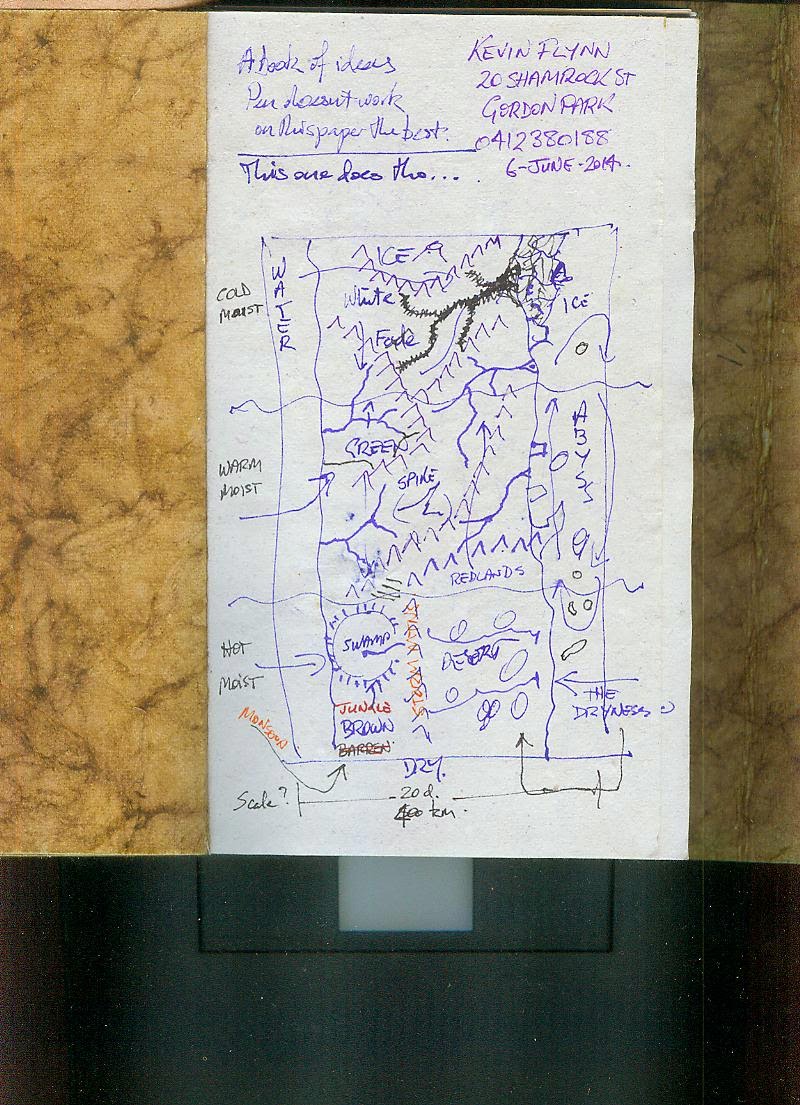 I have almost filled the notebook with ideas and thoughts about this world, which I will expand on in later posts. As part of the whole process however, different to many other worlds I have created, an serendipitous event occurred just at the right time.  to-wit, I saw a post by Jeff Bridges, an artist, offering to do concept artwork for $200 a pop.

I had been looking at professional artwork off and on over the last couple of years and the general feeling I got was that you will pay $200-500 for commissioned works, depending on a lot of things. So $200 was an attractive price, plus I had a look at his other work it they looked really good and fitted the style I wanted to use. Jeff is really good at landscapes, and most of the images I wanted would be exactly that as I tried to create the right image in peoples minds of what my world was actually like.

So I bite the bullet and decided to 'don't think!do!'. So I got in contact and commissioned the first work to see how we went. 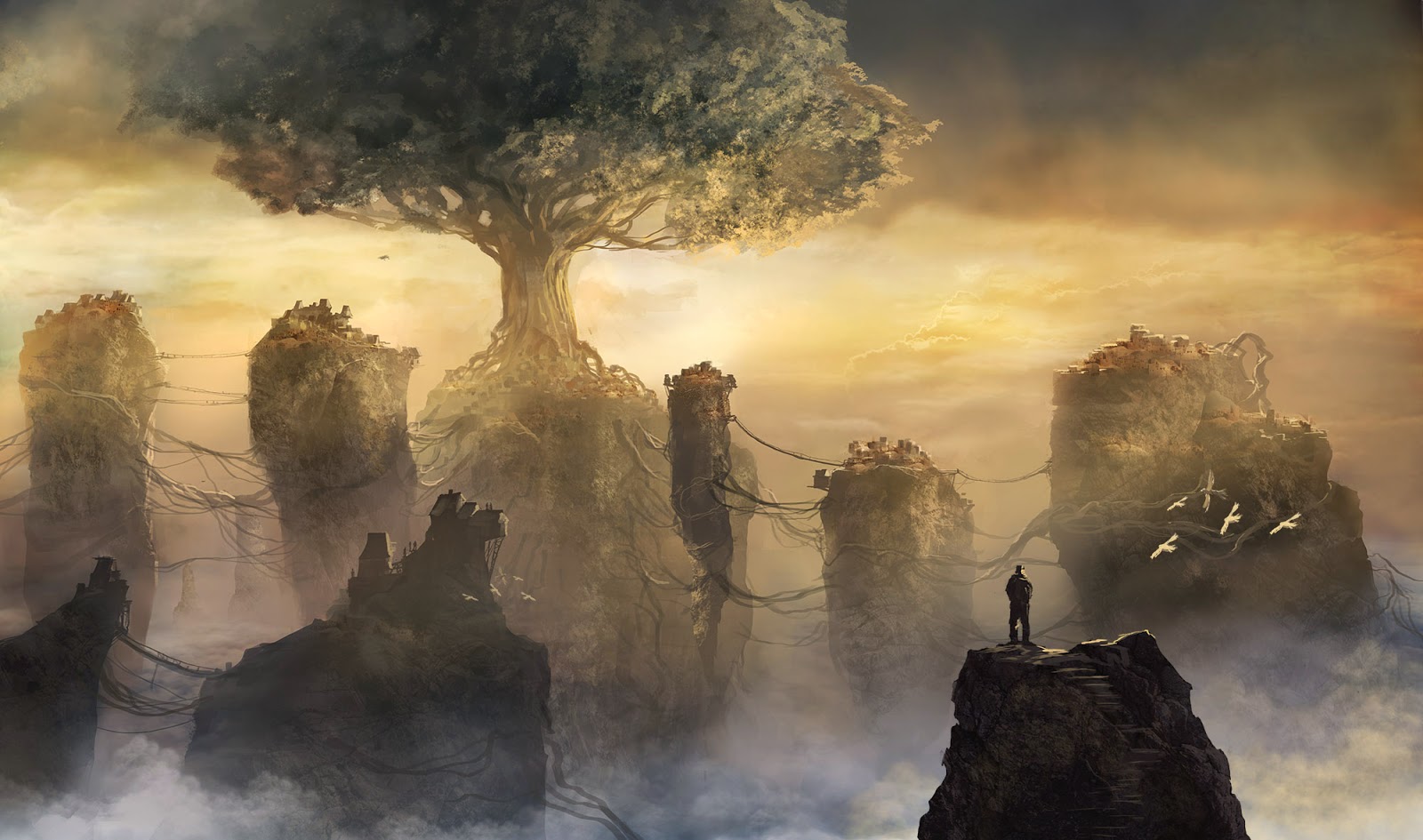 This wasn't exactly how I pictured things, but it is very close. Plus it added a whole pile of features that I hadn't yet imagined that I really liked.  I really liked this image.  My only reservation is that the tree was meant to be bigger, really really big... So now it is a picture of one of the smaller trees, and the big tree is nearby.

This picture was the result of maybe half a dozen exchanges where Jeff sent me a rough image and I asked for changes or suggested options.  I was, and am still unsure how far I can take this... how many revisions do you get on one work? Does it annoy them?  Ah well we are still doing business so I can only assume I haven't passed some unwritten boundary.

Since that image I have ordered 6 more, and I have another 5 to go.  I'll talk about those picture in another blog.

What I did want to talk further about is the map. Once I got into the grove of getting artwork off Jeff I underwent a subtle change in attitude toward getting things done, professionally. This developed over six months, the effect of this was progressive.

I started by doing my own map to improve the image I had and work out a better scale. The following map was the result:

I like making maps, and for myself I like this map, although I can see many problems with it, not the least the colours I chose... purple ice? Anyway.  The map helped to galvanise my image of the world and what it was going to be. A lot of things were added during the making of this map, like The Sink and some of the Abyss islands, but mostly it is true to the original, if slightly re-scaled in some places.

So armed with this map, and mentally comfortable with paying for professional work, I took the next step.

And again this was serendipity.  I had been watching a growing number of cartographers posts in G+ and one that stuck in my mind was because of a project they did, more an experiment with 3D mapping - Neath 3D for SketchUp.  These 3D tools looked really nice so I decided to ask about getting a map done.

And this is a draft copy of his work so far. 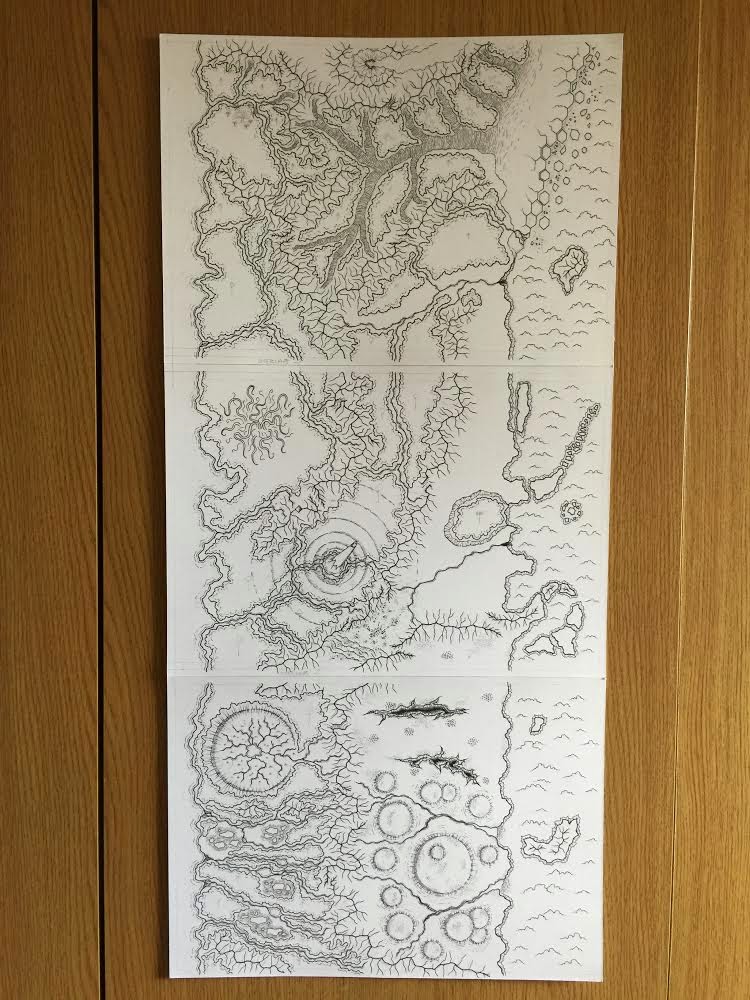 This still requires a lot of work, there are forest fills, cities, roads etc to go in. And sometime later  I will get a colourised version as well. I have seen the map a few extra steps after this version and it is looking really nice.

My ultimate aim is to combine the artwork by Jeff with the cartography by Glynn and produce a really nice combo map.